I didn’t notice it until the bird began occupying it for long stretches, clearly focused on the business of incubation. This bird—a cardinal—had built her nest in the Rose of Sharon outside our half-bath window. The clever cup of woven weeds, leaves, and twigs rested low in the bush and close to our house: a snug location, protected from spring showers and summer storms, and, for me, a lucky location. I had a front-row seat to a cool production.

But it wasn’t easy to get a glimpse of the eggs. For a while, all I could make out of the nest’s inhabitants was the female’s brownish head and alert eyes. Sometimes she’d sing. The male cardinal lingering nearby would bring her food, swooping into the bush, a flash of gorgeous red.

Then one day, the nestlings appeared. During their feedings, they were especially active, almost frantically so, with their open beaks, pink mouths, jerky movements, plaintive peeps. They looked like wind-up toys. Their mother or father would perch on the nest’s edge to feed them. On such occasions, when the funny little heads were straining upward, sometimes I’d call my kids and husband to the window, so they could see, too.

I often lingered by that window, watching and worrying. I worried something would go wrong, that disaster would find the nest. I worried it would fall out of the bush. I worried a garter snake would slither up through the branches and eat the eggs. I worried about climate change and how it was affecting the cardinal population. I’d noted sad diminishments elsewhere on our property this summer, fewer goldfinches, fewer monarch butterflies around the swath of milkweed, not a single monarch caterpillar. Were cardinal numbers dwindling, too? I worried a storm would catch one of the cardinals off guard, that a bolt of lightning would zap the nest or kill a parent cardinal midflight. I googled, Do birds get struck by lightning? (They do.)

It seemed I’d been right to fret. One late afternoon, two or three weeks after the eggs hatched, my kids and I were watching Beat Bobby Flay, when a commotion outside the living room window caught our attention. One of the young cardinals—smallish, brownish, homely, and still rather fluffy—was trying to fly. When the fledgling careened our way, we ran to the window. It came to a clumsy halt by grabbing hold of the screen, inches from my kids’ flabbergasted faces, then attempted another desperate flutter up into the air, plunged, and once again checked its descent by clinging to the screen. Suddenly, it—flump—dropped into the front flowerbed. I yelped.

Throughout this alarming episode, perhaps two feet away from the fumbling fledgling, the adult male cardinal stayed perched in a hollyhock and watched. What else could he do?

My kids and I anxiously peered into the thorny riot of rosebushes close to the house and searched for the poor young bird. Just as I was wondering if we should attempt a rescue mission, the fledgling shot out of the tangle and, in what I can only describe as a flying sort of stagger, flew away. The dad promptly followed. 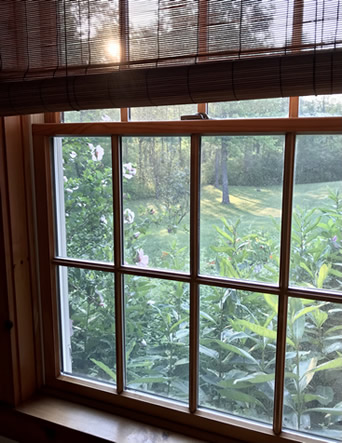 Ever since that stressful incident, the nest has stood empty. I hope those young birds learned to fly without killing themselves.

I learned interesting things from this bird drama. The adult male’s participation, for instance: It surprised me. I’m glad he wasn’t a deadbeat dad who let the mama cardinal do all the work. I was also struck by how focused on the young ones’ survival the older cardinals remained at every stage of this enterprise, from the incubating and feeding to the guarding and following. Parenting was a job they took seriously.

At this point, you’re probably wondering why I’m telling you about these birds. Maybe you’re thinking, oh, no, is Melissa going to turn this into a metaphor? I’ll admit I’m tempted. There were times that nest made me think of my current life—my summer nesting, with my kids mostly safe and sound at home with my husband and me, but dangers lurking outside, the pandemic persisting, the coronavirus disease mutating, my son still too young to get vaccinated, and the schoolyear approaching. Also, this nest drama coincided with my older kid’s August birthday. She turned thirteen the day before the young birds flew the nest, and considering how hard last year was for my kid, how she struggled, strove, railed, failed, and changed, how could I not see her trials in that fledgling’s difficulties and how could I not relate to that adult cardinal helplessly watching his young one fly, fall, fly, fall, a parent unable to do much of anything except witness this painful stage and stick close. And hope things get easier soon.

Yes, it’s very tempting to anthropomorphize the bejesus out of these cardinals. I probably already have. I made this chapter of their life fraught with feeling. I marveled. I worried. I related. I wondered…

What it must be like to build a nest in a beautiful shrub, to watch light flicker and spill through the foliage, and to see the butterflies and bees and hummingbirds flit into the branchy neighborhood and dart into the shrub’s flowers, such beautiful blooms, white and ruffled like christening gowns. What it’s like to sing to one’s mate. What it’s like to care for and warm one’s brood.

Everything is happening so fast.