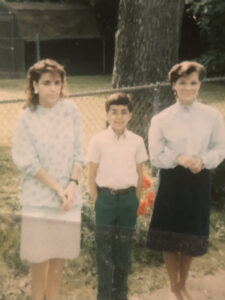 My kids are eleven and thirteen years old, and my current work in progress is a middle-grade novel. Between the kids and the book, I’m up to my eyeballs in middle-school struggles, successes, and changes. It’s no wonder I’ve been thinking about my own tween years lately.

I turned eleven in 1984. When I was in sixth, seventh, and eighth grade, a lot happened. Prince’s Purple Rain was released. For the first time, a woman—Geraldine Ferraro—ran on a major political party’s presidential ticket. Scientists identified HIV as the cause of AIDS. I saw Sixteen Candles at the movie theater. Ghostbusters. Amadeus. The Color Purple. Ronald Reagan was President of the United States. Mikhail Gorbachev became the leader of the Soviet Union. I played a lot of Super Mario Bros. The first .com was registered, and the first version of Windows was released. Pop stars sang together and raised millions to help the starving in Africa. Ordinary people held hands, formed a human chain across the United States, and raised even more money. Planes were hijacked. A volcano erupted. The earth quaked. A nuclear reactor exploded. A space shuttle did, too. The Oprah Winfrey Show debuted. Comet Halley visited our solar system. END_OF_DOCUMENT_TOKEN_TO_BE_REPLACED