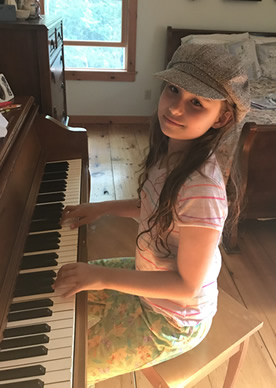 Of all the damage this pandemic has wreaked and the changes it’s wrought, my kids’ giving up the piano shouldn’t rank high on my list of woes, but the piano sitting in my house these last couple of years, increasingly untouched and ignored, has bugged the heck out of me. As pianos go, it’s on the small end—a spinet. Yet even a small piano is a big instrument, and lately, given its silence and untapped potential, it also seems like a big sad symbol.

My kids started playing the piano at a young age. They attended their lessons and practiced faithfully if sometimes grudgingly. They played well. At the onset of the pandemic, however, their wonderful teacher, rather than simply suspending instruction, decided it was a good time to retire. I didn’t search for a different teacher. With the disease circulating, I didn’t want my kids going to piano lessons—or anywhere.

Despite the lack of lessons, the two kept up their practicing for a while. Then less and less: less frequently, less enthusiastically. Then not at all.

I miss their piano playing. They used to do weekly “concerts” for me. I think they liked practicing better when I sat close by and listened to them play. I liked this, too—loved being their audience, as they flew through their memorized songs, then squinted at new sheet music while tentatively feeling for the notes and chords. And I loved attending their yearly recitals, how they’d take their little bows at the end of their performances. And I loved when they made up their own tunes or picked out the notes of favorite songs. I remember how, when I was on a “Downtown” by Macklemore and Ryan Lewis kick, my daughter frequently played the song’s funny little opening—just for me.

Actually, a lot of this piano business was probably just for me.

But, oh, in my defense, I wanted it for them, too, for the happiness, satisfaction, and confidence I was sure piano playing would lastingly bring.

A recent incident, however, has made me feel better about the abandoned piano situation. 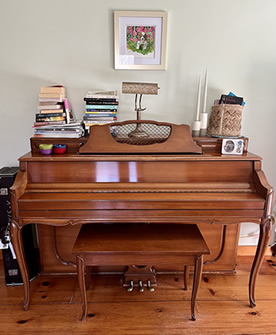 Last week, for the first time since the pandemic began, our kids’ school held a music concert—cautiously, requiring mask-wearing, of course, but also staggering performance times by grade level, to limit the number of people in the auditorium, and socially distancing the instrumentalists on the stage. My younger child, who’s kept up with his trombone, is the sixth-grade band’s only trombonist, and during every song his group performed, I could hear him belt out his part. He played so confidently and beautifully. I don’t know why this surprised me, but it did. I suppose, in my sadness over the silent piano, I’d forgotten he was still making music—only elsewhere.

Anyway, I was proud of him. And I was heartened. Maybe more important than the way in which art is achieved is the fact that it’s attempted at all, especially during troubled times like these.

Strewn generously around the making of art are the seeds of happiness. “They have a gift,” we say of creatives—the gift of talent, for sure, but through the fruition of their talent, a gift for others, too: the marvelous means of sending joy to the world.

A creative life can be such a good life, a life lived keenly, attentively, empathetically, present and sensitive to others. I want this for my kids and hope they want it for themselves, too, enough to stick with their creative endeavors—trombone playing or drawing or singing or writing. Or whatever. That’s up to them.