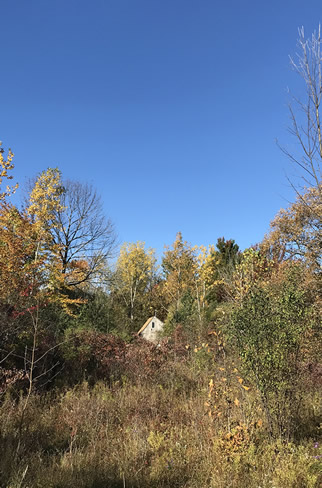 Woods curl around our house, and on the scrubby lot to our south, opposite a strip of young aspens and oaks, sits a shack, half-hidden by brush and surrounded by wildflowers—asters, daisies, buttercups, goldenrod, Queen Anne’s lace, purple vetch. The little structure boasts a tiny window, uneven roofline, stovepipe, and white door. Twenty years ago, when I first saw it, I thought of Charlie Bucket’s house in Charlie and the Chocolate Factory, quirky, ramshackle, small but teeming with family, grandparents included, and packed floor-to-ceiling with love.

I don’t know who owns this property. Whoever owns it never visits. The building was probably once used as a hunting shack. Now it’s empty. My spaniel Mocha and I walk past this property almost every day in every kind of weather. It shimmers in the sunshine, its countless leaves like a shower of coins, and it retreats under storm clouds, like a solitary creature sleeping in a burrow, tucked away from the wind clattering the branches and the rain pattering through the canopy. Each season dresses the spot uniquely and shapes its character. It’s electric green and soft as feathers in the spring, lush with flowers and foliage come summer, austere in its autumn hues like an Andrew Wyeth painting, and glittering in the winter, a fairy queen wrapped in a gown of freshly fallen snow. 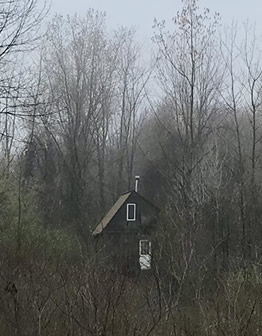 There’s something about this shack’s abandoned state: It’s like an invitation. I haven’t broken into it, but it has broken into me, trespassed on my mind so often, I somehow belong to it. And, at least until somebody returns to claim it, it belongs to me.

I’ve filled my shack with dreams. Sometimes I turn it into a writing nook, just big enough for a desk and a chair, bookshelves, a woodstove, a soft rug for Mocha. Sometimes I make it a bit bigger, give it a bathroom with a clawfoot tub, the merest kitchen, a bed up in a loft. Even larger, it could hold a little table and a comfy couch. Now it’s a cabin where a friend can stay. I like this dream: The friend stops by my house in the morning for coffee and pastries. I stop by the cabin in the evening for wine. In the afternoon, we meet on the road and go for a walk. It would be a sweet writer’s residency, I think, a cottage for someone who needs time and space to think and likes big-sky country, wildlife, stillness, silence, orchards, and water: Lake Ontario sprawls a few miles to our north.

But sometimes I grow this shack even larger and turn it into a restaurant. We could really use a good restaurant around here. It’d boast a serious kitchen with a brick oven to bake the most delicious breads and pizzas. And diners could choose to sit out on the screened-in porch, snugly surrounded by woods. Who wouldn’t want to dine back there? Imagine the candlelight, fireflies, laughter, conversation, stars. The homemade dishes on handmade plates. The appetizers, the desserts. And a lovely selection of wines, to boot.

I don’t worry about logistics, like remodeling expenses, building costs, taxes, or who besides me would want to write in the tiny space, who’d want to visit, who’d clean it, who’d bake the brick-oven breads and pizzas.

I do, however, get a little uneasy contemplating how any future incarnation of the shack would necessarily change its shackiness. Yes, I love the shack for what it could be. But I also love it as it is. A transformation would alter the shack permanently, and permanency sacrifices potential. As long as it remains a tiny, abandoned shack, it can house beautiful and varied possibilities. 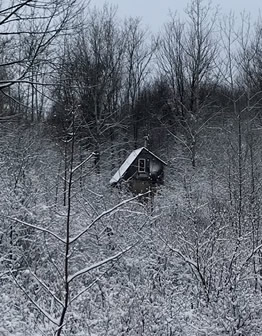 Maybe some stories, like my tale of the shack, are better left unfinished and in a constant state of revision. There are so many potential plots, spreading like roots and twirling like vines, and there are such lovely characters, composing poems, picking flowers, napping in the loft, and, by firelight and fireflies, forever sipping wine. Let these characters keep mulling and murmuring. Let them be alone and together. Let them enjoy the beginning of a romance. Let them wish and wonder. Let them write and write. Don’t tie things up or pin things down. This story delights me. I don’t want it to end.