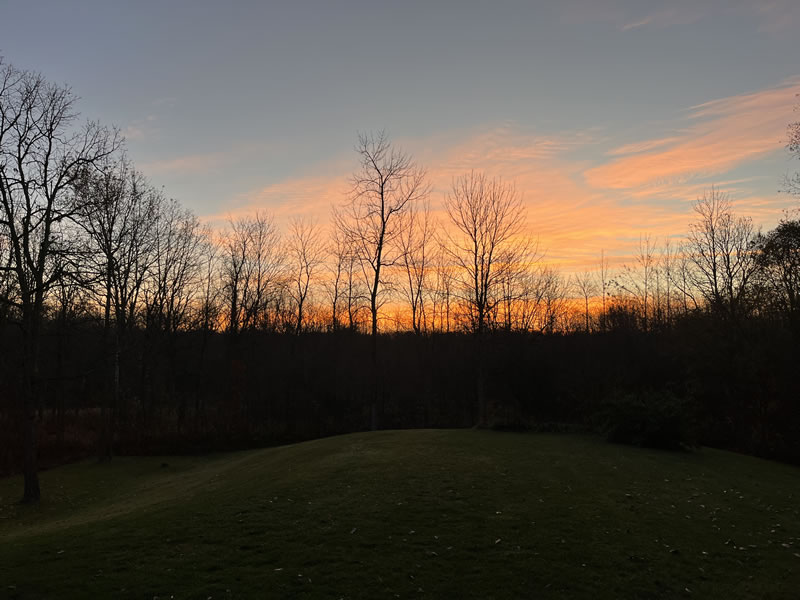 At the end of October, for three nights in a row, a few hours before dawn, strange cries reached me. The first time I heard them, I shook off sleep and staggered upstairs, thinking one of my kids was in the grip of a nightmare. I was wrong. The cries were multiple and coming from outside—outside, but nearby. Coyotes.

I’d seen coyotes before, but singly, never in a pack. Those three nights of yips, whines, and whistles were something else. I thought maybe the coyotes were calling to one another and gathering after their hunt, but I recently did a little research and read how, in October and November, the young disperse, and such cries communicate the establishment of new territory, like an auditory fence.

Whatever the reason for the ruckus, my spaniel Mocha and I have since found evidence of the coyotes’ presence—scat, of course, and mysterious scents, which Mocha has picked up with some especially intent sniffing. The coyotes had come close.

Something else I learned in my research was that coyotes are sometimes called “song dogs.” Isn’t that lovely? Lately, I’ve been noticing how musical, in general, nature is, particularly in autumn. The state of the foliage and possibly a quality in the atmosphere seem to amplify the shufflings, rustlings, flutters, and stirs in and under the trees. Even rain sounds different in the woods this time of year, pinging a flatter patter on the dry foliage, almost a thud. Our walks sound different, too. The fallen leaves amplify our steps with a fragrant crunch, crunch, crunch. Geese honk overhead; closer, crows caw, chickadees chirp, squirrels chatter. Wind teases the trees, and leaves answer with a crackle, as they topple through the canopy, then sway to the ground.

So many sounds from the woods, but not coyotes. We haven’t heard them since those three nights in October. Still, it comforts me to know they’re there, among any number of creatures I’ll never hear or see, the woodland wild that lives beyond the range of my senses.

I like to imagine those secrets deep in the woods—or maybe not so deep. Close but apart. What a beautiful adjacency. I wish more of the world were wooded, not for hunting, not for hiking, not for any kind of exploring. Just left alone by the likes of us.