MO: Sandhour, your third collection of poetry, is forthcoming from Saturnalia Books on October 15, 2019. Tell me about it.

RO: First of all, thanks for giving me the chance to talk about the book. I still haven’t hammered out my elevator pitch but would say that this book documents my attempt to employ a practice of poetry that would help me untangle and understand something that was making it difficult for me to be a person. Yeah, I should work on the pitch.

MO: How did the book come about?

RO: It’s a long story. And one that involves a book I haven’t written but may still want to, so it’s tricky to talk about. Sometime around 2005, I made plans to write a focused project. I hoped to grapple with and get to the bottom of what I believed was at the core of my personal struggle—issues related to our evangelical upbringing. Through self-imposed constraints—both physical and semantic—and by repurposing the practices I was so familiar with—like ritual, prayer, and ceremony—I planned to undertake a writing process that would, in short, free me. Learning often happens whenever I’m working on a poem but sometimes not until I’m deep into the writing of it. I wanted to see how it would be if I directed my attention at this specific thing inside of me. The project took so long for me to start for a couple reasons: I needed focused time, and I was afraid of how such a reckoning might change me. In 2016, on the cusp of turning 40, alone at my friend’s remote cabin in Maine, I decided to begin what was already titled Sandhour. So many years had passed since I thought up this project though, and I wasn’t sure why I still felt inclined to do it. Therefore, I set out to write an argument for it. I established some restrictions that would hopefully keep me from slipping into my comfortable mode of writing. To my surprise, this argument—which was intentionally meant to be private writing—grew into the book.

MO: You mentioned restrictions you set for yourself. Can you talk about what those were?

RO: I was trying to be honest with myself about what I wanted to do, and I knew that lyric poetry could help me do this, so first I set some rules. One restriction that became important to this book was to resist thinking about the writing as something that would be consumed, that had an audience beyond myself. I decided that a distilled lyric, one that didn’t employ the “I” (since that assumes a “they,” an audience) would be more honest. I didn’t want to write the poems as prose poems, but I also wanted to take away line-break considerations, so I fully justified the margins and wrote the poems inside of small boxes, without any punctuation. A conversation I had with Tomaž Šalamun who spoke of keeping poems alive by not over-editing them, got me wanting to resist covering up all of the brushstrokes. Finally, as much as I could, I decided to stick to historic facts even if it meant forfeiting the music. This argument, which is now the second section of the book, propelled me in a different direction than what I had originally intended, and while I loosened some of the self-imposed restrictions, they set the tone for the rest of the work.

MO: How did you find poetry? And when? Do you remember?

RO: I don’t know that I found poetry. It seems like it was always there. We had old books in our house—The Spell of the Yukon by Robert W. Service and mysterious and indecipherable

books like Paradise Lost and of course the Bible. That was important in our household. And the hymnals. Verse was the word of god and how you spoke to god, and I think that made it mystical and powerful for me. Poetry was something I could do. It seemed obsolete and atypical, and that appealed to me. I was doing a secret thing. A simultaneously essential and impractical thing. I was really into Edgar Allen Poe. Part of my bedtime ritual for a long time was writing two alternating rhyming couplets a night. I was working on an epic poem about love, murder, and deception. But then Grandma cleaned my room and threw it out.

RO: She got a long silent treatment for that…. So yeah, as a kid, I fancied myself a poet, even though my understanding of what that meant was limited, but I truly fell in love with reading poetry when I was in college.

MO: I like that you pursued poetry in college.

RO: Well, pre-med wasn’t working out for me! And at that time in my life I had been depressed for so long that I was willing to take risks and make impractical choices. Like following passions. And like backpacking for a month in the Yukon Territory because, as a kid, I promised myself I’d follow Robert W. Service there.

MO: Which poets do you admire now?

RO: For this project—because it was churning inside of me for so long—I found inspiration in a wide range of poets. Blake, Dickinson, Hopkins, Picasso’s poems, Fernando Pessao, Susan Howe, Ronaldo Wilson, Christian Hawkey, C.A. Conrad, Thoreau.

MO: Is there a sore spot you keep worrying with your poetry? My characters feel guilt and remorse a lot. They struggle with shame and longing. What about your poems?

RO: I do think our obsessions are ultimately in control. Shame is a big one. Guilt, too. Inheritance is something I mull, especially in this book. And these obsessions wouldn’t let me go. Even when I hoped the book was done, it kept insisting it wasn’t. At the onset, I thought this project would hash out spiritual troubles, but as I unearthed these things from my personal history, our parents kept emerging. One thing I learned is that they neglected us in ways that left holes in our lives. Religion filled those holes in mutated versions of what should’ve been there. For instance, I wanted to feel safe, so I looked to God to make me feel that way. It didn’t work. He terrified me, and he also became the target of my anger.

MO: Jesus always seemed nice. But God was wrathful. God would put you in hell if you weren’t good.

RO: Yes, as we were often reminded. Fear and guilt kept us in check. I still struggle with both, and one big worry I have with this collection is how our parents will respond to it. I needed to excavate some personal family stuff, but I don’t want to hurt them.

MO: Which era of personal stuff? When we were little and poor or older and Mom left…?

RO: All of it. I revisit the places of our childhood. And that frightened me. But it also felt necessary and worthwhile to my own survival—which is also kind of how poetry felt to me as a kid. Vital. There’s something about the reason we began to write in the first place: that impetus was powerful. I wanted to get back to that. 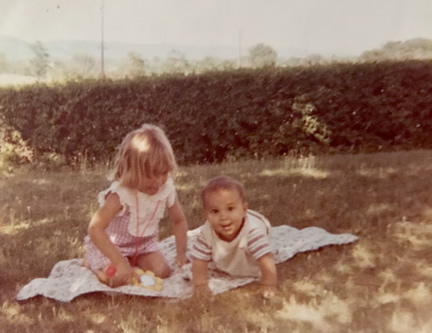 MO: So is this book a sort of memoir?

RO: No, not at all. Maybe tracing these memories are attempts to pinpoint where something went wrong. This book looks at our childhood, and though the second section is organized chronologically, according to the homes we had, starting with the trailer, it isn’t a retelling.

It is less biography and more of a document of a trial I put myself through in an attempt to come out the other end, changed, with more understanding. And that was a scary thing to do. We were raised to be secretive. Private.

MO: I feel that way sometimes, too—protective of our family secrets.

RO: Yes. I often questioned whether this book should be published. If I should be revealing this stuff.

MO: That fear is sad. That’s our parents’ hold over us.

RO: And like I don’t want them to know how I hurt. I want to protect them from that. And I also don’t want to paint everything as bad.

MO: It wasn’t all bad. And when I think about the bad, I look for ways to excuse it, like how Mom and Dad were so young when they became parents, just teenagers, and were dealing with their own traumas.

RO: Yeah. I didn’t set out to write an indictment. I was just figuring stuff out. I tried to write this book and call it done. But then I’d write something more and I’d realize, oh, this is part of the book, too. I kept adding things. That’s been instructive. It’s helped me find courage and let the work teach me things. There’s a whole section of the book that’s possibly off-putting to readers. While much of the book, especially poem titles, allude to the Bible, this poem uses language lifted from the Bible—specifically, reordered language from my confirmation bible that I highlighted or annotated as a kid. I kept asking myself, why am I doing this? I could have easily taken that section out. It gutted me to write it, and the idea of it out there, in print for others to read, terrified me. Ironically, those seemed like reasons enough for it to stay. But it troubled me. There’s also something inside of me that—however embarrassing it is to admit—shows a persistent fear of god and hell. That fear ate away at me when I was a kid. Hell was a major obsession of mine, and we were regularly reminded that it was our possible future. We had those terrifying books about hell and the devil. It wasn’t until I started proofing the final manuscript that I realized: I want hell to no longer be ingrained in me. This book has made that more possible. It’s nice to not believe in hell. It makes life more enjoyable because, for one, it makes it possible to forgive and even love ourselves.