Summertime is filled with the tasks I enjoy most. I live in Lake Ontario fruit country, where there are so many berries, cherries, peaches, and plums to do things with, bake into cakes, pies, and crisps, preserve or freeze. By August, I’m pickling cucumbers and canning tomatoes. Inevitably, at some point, a neighbor will leave a bag of zucchinis on the porch, and it’s a shame to let nice zucchinis go to waste. In the meantime, I have a writing project languishing, neglected. But the warmer months are also my pottery months. My studio isn’t heated, so I have to wait until the summer to throw and fire pots.

Last week, I did my first firings of the season. Almost all of the pots in these firings are mugs, and almost all of them, marbled. I’m on a marbled-mug kick and especially like the blue and white variety.

It’s easy to marble. I take a white clay body, usually porcelain, leave half of it pure, and wedge color into the other half: cobalt carbonate if I’m after that pristine blue, chromium oxide if I want an earthy green, or a combination of the two for a robin’s egg hue. Sometimes I’ll use a little red clay with the white. Whatever the combination, the potter’s wheel manages the veining of color. I simply slap the tinted and non-tinted clays together and throw the ball as I’d throw any ball of clay. The turns of the wheel-head bring about the marbling. 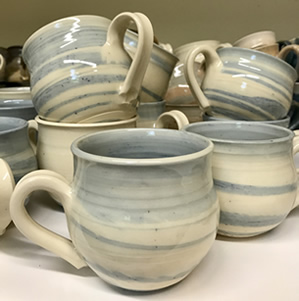 I should note that usually, even after trimming the pot, the marbling isn’t discernible. Bands of color don’t appear until after the pot’s been fired and the heat of the kiln has pulled out the pigment that was wedged into the white. After a glaze firing, I love to see how the wheel ended up marbling the juxtaposed clays. Sometimes one color will finely thread the other. Other times the tinted bands will come out as sweeping swaths, broken by strips of glossy cream. Opening a kiln after a glaze firing is exciting. Some potters compare it to Christmas morning. It’s a celebratory occasion, a holiday of surprises.

As different as pottery and writing are, they must tap a similar part of my brain. With both of these activities, I tend to forget myself and lose track of time. And though this might sound like a stretch, I think there are parallels between making a pot and telling a tale.

This marbling, for instance—taking two contrasting shades of clay, putting them together, and letting an external factor (the potter’s wheel) do the weaving work—makes me think of how two very different characters, when thrown into a situation together, generate an interesting story. The Misfit, the grandmother, and an empty stretch of road by a woods in O’Connor’s “A Good Man Is Hard to Find.” The cynical Dmitri Dmitritch Gurov, the tenderhearted Anna Sergeyevna, and Yalta on the coast of the Black Sea in Chekhov’s “The Lady with the Dog.” The man with the gold convertible, Connie, and her empty house in Oates’s “Where Are You Going, Where Have You Been?” In each, a character appears. Life is disrupted.

And yet throwing two different colored clays on the wheel—or putting two very different characters together in a situation—doesn’t cut it. What’s necessary for the story to unfold is heat, fire: the crucible or test. A problem, perhaps springing from the fraught togetherness of conflicting/conflicted characters, must be posed. How will the protagonist answer it? Can she? What struggle will it entail? What choices? What actions? 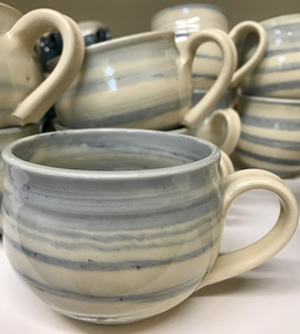 I remember learning that somewhere in the Bible, God is compared to a potter. Picturing a laidback, ponytailed hippie kicking the potter’s wheel, I found the comparison funny. But upon closer examination, I guess there’s something to it, not so much because of the notion of humans being moldable lumps of clay on a divine wheel, but because of the fierce firings life deals us. They do sometimes seem like blistering blows delivered by a merciless and mighty hand.

Still, firings are necessary. A piece of pottery, no matter how exhaustingly crafted, won’t hold up without the heat. In fact, an unfired pot dropped into a bucket of water simply returns to malleable clay. Fire fixes the form, effects permanency. People aren’t so malleable either after getting burned. The warmth of happiness and love form us, but hot and harrowing hurt gives us that hard finish.

Literature is riddled with tense relationships and fiery trials. We read a story to see how a protagonist confronts, passes, or fails whatever test the situation foments. Sadism doesn’t draw us to these sufferings, but rather hope. We trust a character will endure. We know we’ll witness a transformation. And we will see affirmed what we long to believe: that change is possible. Change is survivable. Indeed, change can be beautiful.