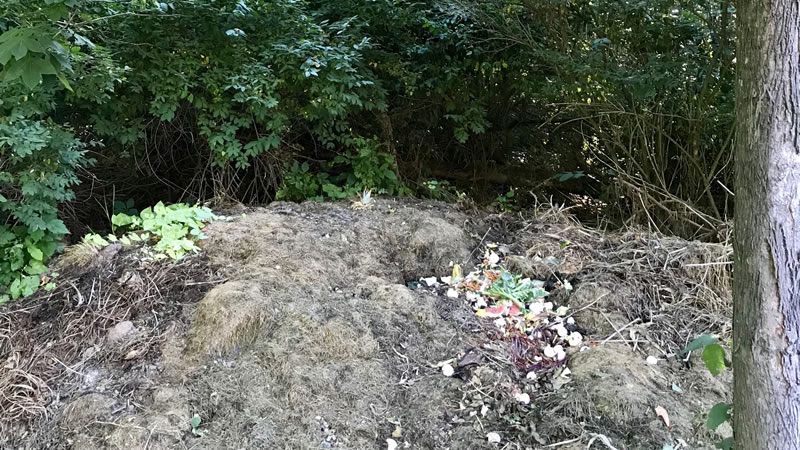 Light splashed this morning
on the shell-pink anemones
swaying on their tall stems;
down blue-spiked veronica
light flowed in rivulets
over the humps of the honeybees;
this morning I saw light kiss
the silk of the roses
in their second flowering,
my late bloomers
flushed with their brandy.
A curious gladness shook me.

So I have shut the doors of my house,
so I have trudged downstairs to my cell,
so I am sitting in semi-dark
hunched over my desk
with nothing for a view
to tempt me
but a bloated compost heap,
steamy old stinkpile,
under my window;
and I pick my notebook up
and I start to read aloud
the still-wet words I scribbled
on the blotted page:
“Light splashed . . .”
I can scarcely wait till tomorrow
when a new life begins for me,
as it does each day,
as it does each day.

—“The Round” by Stanley Kunitz

Last spring, I sent a picture of my tulips to my mother. She sent me a wordless reply: her plumeria. A few days ago, my brother shared a photograph of his yellow squash—just hours after showing off his cucumbers. He keeps us informed of his vegetable garden’s progress with visual updates. My older sister does the same. This year, she has sent me pictures of the peonies skirting her old farmhouse, the gladiolas by her picket fence, and the blackberries dangling along her property’s thicket.

I can’t seem to walk around my place these days without my camera. In April, I doted on the daffodils nodding in the front meadow. Then it was the lilac bushes that perfumed the middle of May. In June, I couldn’t get enough of the roses filling my living room windows, snagging the screens with their thorns. Then I OD’d on the hollyhocks that took over July. Now I get to look forward to the butterfly bushes of August.

People are probably sick of seeing pics of my plants. Even though most of my followers on Twitter are writers and readers like myself, I’m much more comfortable sharing a picture (or twenty) of flowers than tweeting about writing. And when it comes to spreading the word about my novels and setting up giveaways, I, well, don’t—or at least not as much as I should, even though that’s why, at my agent’s request, I set up my Twitter account last November in the first place. My foray into social media has become a garden journal, showcasing the explosive red heads of my bee balm, the insects swarming the milkweed, the white clover taking over the front yard…

Never mind my books. You’ve got to see this daylily!

One thing I’ve never taken a picture of but really should is the compost pile. It stands on a corner of our property and has grown into a hill, a mighty mound of moldering matter: discarded weeds, grass clippings, egg shells, carrot peelings, wood ashes, autumn leaves, coffee grounds, grapefruit rinds, banana peels, peanut shells, peach stones, avocado pits, and anything else that qualifies as organic waste. In the springtime, I shovel out from the middle of the pile, fill the wheelbarrow, and transfer the humus to the flowerbeds.

Sometimes, the pile, itself, becomes the garden. One November, I tossed a buttercup squash that had sat around my kitchen for too long, and the following year, vines sprang out of the heap and wrapped themselves around the trunks of the trees half-encircling the compost. We ended up with a bumper crop of winter squashes that hung from the awning branches like big, warty ornaments. And one April, I brought up a cardboard box of dinner-plate dahlias. (Dahlias don’t winter over, so I had to dig them up the previous fall and stow the tubers in the basement.) But upon opening the box, I noticed that a couple looked shriveled and lifeless, so instead of planting them, I threw them onto the compost pile. Come August, those discarded tubers ended up producing the most beautiful blooms, outrageously big red dahlias, shooting straight out of the refuse.

Sure, this humble hill makes sense for economic and environmental reasons. It doesn’t cost a thing and does a lot of good. But why I really like it is because it’s wonderful. I mean that truly: it fills me with wonder, how it takes the rotten, lowly, and discarded and, with the help of worms, fungi, bacteria, and plain old air and water, turns them into something of value.

The compost pile is a true story of transfiguration. I usually think of this radical element as belonging to fairytales—the mermaid trading her fishtail and enchanting voice for legs and the chance to seek a human’s affections, the fairy godmother transforming the mistreated stepdaughter’s rags into a bejeweled gown and giving the poor girl back her stolen nobility. Though obviously not as glamorous as these tales, the compost pile, nevertheless, holds the promise of beauty, restoration, and rebirth. It tells a happy story.

I would go so far as to argue that the compost pile offers something to the writers among us, too. It reminds us that nothing need be wasted. The weeds of abuse, the rotten hurts of rejection, those days we call “the pits,” every scrap, shell, and clipping of experience: all fertile material for our stories.

Maybe I’ll share a picture of my compost pile, after all, and accompany it with a short tweet: hope.