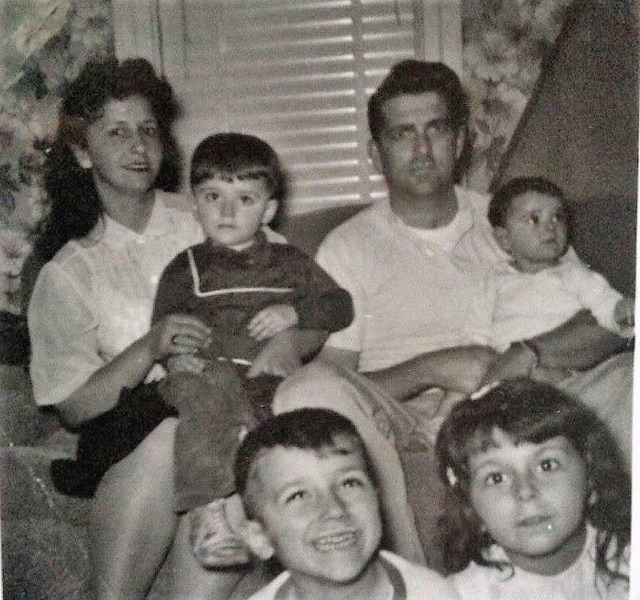 My grandmother worked in a rag shop. That’s what the family called it, and as a child, I understood it to mean precisely what it sounded like: a business in our hometown of Jamestown, New York, where rags were made. According to Grandma, the Salvation Army provided her employer with the raw materials, donating the clothes the thrift shop couldn’t sell. I used to picture Grandma sitting ramrod straight among coworkers, ripping shirts, pants, skirts, and dresses into pieces, while she told her ribald stories, making people laugh and laughing along with them.

I’m not sure of my picture’s accuracy, though the laughter was probably a given. Grandma was very funny. But as for the rag shop’s procedures and purpose (making rags…for what?): I’m not certain at all.

I do know, however, that Grandma never tore apart anything without first checking the pockets. She would tell us about her finds, the wrinkled dollar, quarter, dime. I also know that she didn’t destroy an article of clothing if she considered it salvageable—namely, for my siblings and me. At the end of the workweek, she would lug a garbage bag filled with rescued garments and walk from the rag shop, past Evan’s Skateland and the Jamestown General Hospital, to her house on Barrett Street, sort of like Santa Claus, only small, female, swarthy, and black-haired.

On most Sundays, we visited her to have supper and collect the clothes. These occasions were festive. We always gathered in the dining room at the front of the house, maybe because it was the brightest, with the porch-facing windows, or maybe because it was the warmest, since the huge floor furnace was in there. I remember the little table with its rotary phone, the rocking chair in the opposite corner, the wall display of framed senior-year photographs of our father, aunts, and uncle, and the sideboard with its candy bowl, rosary beads, and little picture of Jesus, standing outside a closed door, his wavy brown hair, aquiline features, and robed presence all aglow. Delicious smells would waft into the dining room from the kitchen, caldo verde, sweet bread, or a dish Grandma called “mul,” a concoction of fried peppers and linguiça, threaded with wisps of egg.

Sitting in a dining room chair by the old floor furnace, the garbage bag at her feet, Grandma would pluck out an item of clothing, give it a brisk shake, and hold it up. If the article was for a boy, there wasn’t much discussion. Only one of us could claim it: Robbie. But if it was for a girl, sometimes my sister Noelle and I wrangled over it. Our wardrobes depended on the rag-shop finds.

Grandma didn’t bring home anything riddled with holes, but frequently, the clothing teetered toward the threadbare stage. I spent my childhood in underwear that quickly turned crotchless, bras with straps that unraveled, and long socks that, after a washing or two, lost their elasticity and slipped down into my sneakers, a scrunch of scratchy wool under the arches of my feet.

Once, however, I ended up with some Lee jeans that fitted me well and a nice blue shirt. The crocodile polo was popular at the time, but mine was a knockoff, and instead of sporting the little embroidered reptile, it featured a tiny whale. I loved that outfit and probably wore it on a weekly basis until one day in sixth grade when another girl happened to show up wearing a similar outfit. Hers was the real deal: the shirt had an actual crocodile, and the jeans were Calvin Klein. Our teacher called us up in front of the class and drew everyone’s attention to our matching clothes. “Look, we’ve got twins!” she announced, no doubt hoping to encourage some friendly bonding. The other girl tossed her head, snapped, “God, I hope not,” and strode back to her seat. I can’t remember what the teacher said—or what I said, for that matter. Probably nothing.

Around the age of fourteen, I won two bathing suits from Grandma’s rag-shop bag, just in the nick of time. JHS had a pool, and all of the high schoolers were required to take at least one marking period of swimming every year. The first bathing suit was too big for me, but I liked it for its leopard print and because the built-in cups improved my flat chest. The disguise worked until someone bumped into me during class, dramatically denting the points of the stiff foam. Humiliated, I tried the white one-piece back-up from Grandma for my next swimming class, but the switch didn’t work. When wet, the suit turned transparent. After that, I made up a good story about a chronic ear infection, finagled a doctor’s excuse, and never took a swimming class in high school again. (I still can’t swim.)

Not all of the clothes resulted in embarrassment and shame. Grandma once gave me some knitted jersey footie pajamas, also in a leopard print. I loved those pjs to death. There was the argyle sweater, monogrammed with someone else’s initials, but pretty, nevertheless. And there was the striped bodysuit that I donned, whenever I was getting ready to break a sweat to Jane Fonda’s aerobic exercise videos.

Really, none of the well-worn articles were a total loss. They’ve become stories. Plus, they helped shape me and make me who I am. And they’re the stuff of my early memories—hard ones; happy ones, too. The recollections certainly all started happy, with the big black garbage bag, full of possibility, and with my grandmother’s house, fragrant with linguiça and chorizo, plus the scents we carried in with us, the Captain Black tobacco smoke curling out of Dad’s pipe, the Jean Naté perfume on my mother’s wrists.

Those rag-shop years…when my family was very poor but very together. Not ripped apart yet. Not broken or scrapped. For that spell of wholeness, we had my grandmother to thank: frugal and funny and generous to a fault. I’m grateful for her. She always sent us home with full bellies and other people’s garments—old clothes made new by virtue of the fact that they were new to us.