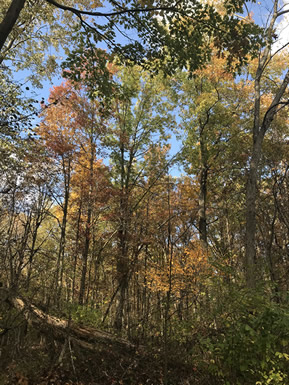 I’m an enthusiastic gardener in the spring, a lazy weed-enabler in the fall. As I write this post, the brilliant foliage in the woods outside my window, though lovely, isn’t quite distracting me from the sad state of a flowerbed, where grass threads the lavender, wild asters bloom whitely between the lanky remains of hollyhocks, and bindweed twirls around the rosebush branches. Worse yet, it looks like poison ivy has gotten a roothold in my hydrangea.

If somebody right now offered me free perennials to add to my collection, I’d rack my brain for a polite way to refuse them. Unfortunately, three days ago, an unavoidable amount of gardening work arrived in the mail—the hundreds of gladiolus, daffodil, tulip, dwarf iris, Dutch iris, alpine rosy bell, star of Holland, cyclamen, crocus, hyacinth, and stardrift bulbs I ordered in the early spring when I was still in the honeymoon phase of gardening. Since their appearance, I’ve been telling myself how happy I’ll be in April when I start seeing these new flowers bloom around the house, but so far, the pep talk hasn’t lured me outside with the spade and shovel.

The labor these bulbs entail reminds me of an expression that writers use: “Plant a few seeds.” It’s a phrase that usually comes up after the completion of the messy first draft—during revisions when the writer is confronting the manuscript’s weaknesses and deciding if she should dig them out, transplant them, or find a way to improve them. If she decides on the third course of action, “planting seeds” can help strengthen the feeble features, that is, if the feebleness stems from the features’ lack of development (a too-sudden change in a character’s perspective, for instance) or lack of believability (like a rescue that reeks of a deus ex machina). The writer can backtrack from the problem and find spots to sneak in subtle telling details: an encounter, a significant object, an expressed fear, a snippet of conversation, an odd observation, etcetera. Collectively, these additions can lay the foundation for what happens later.

Such planting is especially important if the incongruous/improbable happens to be the conclusion. A work’s resolution, though hopefully surprising, shouldn’t strike the reader as farfetched or contrived. The ending should feel…right. And it will if the writer has embedded hints along the way. A deliberate seeding throughout a narrative can lend an inevitable quality to the resolution, make it seem as if it grew organically. The reader may remember the scattered small details and belatedly sense their significance. That after-the-fact ruminating and realizing: It’s such a good experience. Satisfying. We like our endings to feel earned.

Years ago, before I became a writer, when I was simply an avid reader, I’d reach the end of an excellent book and marvel at how intricately certain threads twisted together, how masterfully the small clues added up. I’d think, wow, this author’s a plotting genius. Now I suspect this impressive kind of writer would more aptly be labelled a revising genius. Chances are, at least some of the finely woven threads and scattered clues that made possible the stunning resolution were tied in and planted long after the completion of the rough draft.

This spring, I’ll have to test my own seeding skills. I’m currently writing the culminating chapters of a middle-grade historical adventure set during the heyday of the Erie Canal. When I finish the rough draft of the novel, hopefully by the end of December, I’ll put it away for three months and try to forget it. Leaving a manuscript alone for a long time is helpful, like allowing a field to lie fallow. My relationship with a project benefits from a rest.

If everything goes as planned, my rounds of revision will begin in April. There will be plenty of pruning, thinning, transplanting, and seeding to do in this novel. I like that the endeavor will coincide with the spring, my favorite time of year. Maybe, when I glance up from my desk, I’ll spy a bird building a nest in the oak outside my open window, spot some flowering tulips and daffodils, and smell the fragrant hyacinths circling the house. Maybe I’ll even notice some of the new bulbs blooming. Meh, or maybe not.