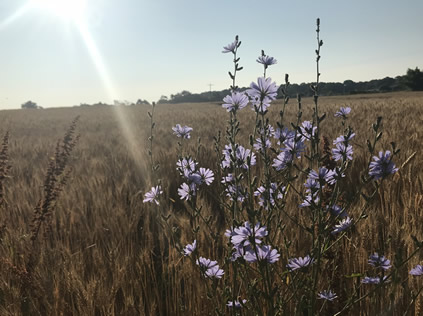 My friend Rebecca recently recommended that I check out A Fit of Shivers, a collection of ghost stories by the children’s-book author Joan Aiken. I really enjoyed it. Aiken describes the enchanted, horrifying, and strange with matter-of-fact briskness to disconcerting and wryly humorous effect. I found the tale “Something” particularly arresting. It plays with the experience of dread. Dread, of course, is inherent in spooky tales, right along with fear and surprise. But Aiken doesn’t merely highlight dread in “Something.” She lets the feeling function as the antagonist.

The story begins, “When the thing happened for the first time, I was digging up wild lilies to plant in my own little garden.” The narrator, a boy, calls this chore “a happy task,” and the setting of the brook with its trout, birds, and alder trees reflects this happiness. Sounds emphasize the harmony: the babbling water, calling birds, and singing boy. The narrator says, “I sang a song, which I made up as I went along, to keep company” with the brook’s “murmur.” The brook, the boy…there’s companionship here. A duet.

And yet there is that “thing” mentioned in the opening sentence. Such a vague reference. Ominous. It shadows the subsequent Edenic loveliness. The reader can’t entirely share the narrator’s peace and joy but is left uneasily wondering about the thing.

What is this thing?

Well, the reader doesn’t get much of an answer, not even when the narrator at last relates the thing happening: “And then—suddenly: fear. Where did it come from? I had no means of knowing. Menace. Cold fear was all around me.” The water no longer cheerfully courses; it threatens with an “icy grip.” The birds no longer call; they “croak.” And the narrator’s mind, which only a moment before seemed “washed clean, like the stones of the brook,” now holds “something hidden, watchful, waiting.” The narrator is afflicted with dread, nameless dread: a terrible something.

This “something” takes over the narrative. When the boy, heart pounding, flees the woods and races home to find his grandfather—the person to whom he feels closest—the grandfather takes one look at him and says, “So it’s happened, has it?” And a few lines later, “It was bound to come. It always does. Your father—your brothers—now you. All our family. It always happens, sooner or later.” It intrigues me that this terrifying “it” that happens is not only an inheritable occurrence but a latent development, a trait like facial hair or a voice change. Like a phase that marks the onset of adulthood.

The “it” is never defined, can’t be defined. But when the boy asks his grandfather if this indefinability is what makes “it” so dreadful, the grandfather says, “No…It is dreadful. My dreams tell me that. It is dreadful, and it waits for all of us.” Even worse, in facing it, “You must learn to stand quite alone.”

An inevitable, lonely horror? The reader might guess that “it” is indeed definable: It must be death. But the story challenges that simple answer with the grandfather’s mulling aloud to his grandson, “What do we know about being dead?” And then he answers the question himself: “Nothing, really.”

Nothing. Something. It. And yet the grandfather does seem to know something about death. He tells his grandson, “Night is a kind of death…You know that I have bad dreams.” The narrator does. He has witnessed his grandfather wake “white, panting, shaking, gasping,” sometimes “hurled…right out of his cot, an arm’s length away from it.” In these nightmares, the Something finds the grandfather and leaves its ghastly stamp on him. The words and phrases used to describe the grandfather, like “gravely” and “eyes sunken into deep, gray hollows,” suggest that though he has so far evaded the Something and still lives, he bears the deathly marks of its visitations.

Then the grandfather actually does die, apparently peacefully, “with his hands composedly crossed on his breast.” Our mourning narrator, hoping his beloved grandfather is at least now free of the terrible Something, is relieved when the priest assures him that the grandfather no doubt has “gone to a better place.” But on the third day of the wake, when the body of the grandfather is discovered “on the stone floor, a whole man’s length away from the bier” with the funereal flowers “crushed beneath him,” it’s apparent that the grandfather, however dead, “must have had another dream”—that the Something must have followed him into death. Eek!

The story ends with the narrator wondering when it will be his turn “to dream about Something.”

For certain, this story, in part, is about the ultimate dread—death—and how awful, unstoppable, and unknowable it is. But by having the Something mobilize the departed grandfather, the story suggests that death is not the only thing to dread, that there is another Something awaiting us. We are only permitted to know that it is terrible—no doubt uniquely terrible. What terrifies one person doesn’t necessarily terrify another. In keeping this Something ambiguous, Aiken allows the reader to fill in the blank. I like that she trusts us to do this work. Our imaginations need no help in the torturing department.

Aiken’s story also underscores how the experience of dread is so, well, dreadful. It is an incredibly uncomfortable feeling, one probably most of us are apt to squelch as quickly as possible. It is as if our dread deals more misery than the object of our dread. “Just get it over with,” we say about an impending pain, stress, or punishment. Or, “The suspense is killing me.” Dread is paradoxical: It’s drenched in fear and reluctance and yet begs brave confrontation. Its poison is its cure.

A writer hoping to craft a gripping story might want to keep in mind the agonizing quality of pins and needles. By fostering dread in the reader, a writer can create a page-turner. Readers read quickly and intently when they are anxious for their suspense to be resolved and their dreadful dread, dissolved.

Perhaps we enjoy such stories because we usually can find resolutions and see dread dispelled in the end. We crave relief. Yet how interesting and wickedly clever that in “Something,” Joan Aiken, by having “It” pursue the grandfather after death, denies us that luxury.